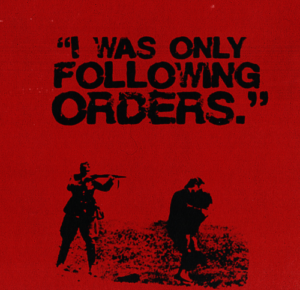 The other day, during a visit to a local public sector hospital I noticed that a baby’s saturations were 100%. The baby was receiving blended nasal prong oxygen. The alarms on the monitor were not set. This is a common finding and of major concern not only for all the babies who are being placed at risk of retinopathy of prematurity (ROP) but also for our institutions due to the high prevalence of litigation particularly for ROP.

I swung into action teaching on why it was so important to set monitor alarms accurately, the problems of alarm fatigue, the risk of retinopathy and the crucial role of nurses in managing oxygen therapy and in particular weaning oxygen according to saturations. While teaching I demonstrated setting the alarms and weaned the oxygen until the baby was in room air. At that point the doctors arrived to do a teaching round and the consultant was most unimpressed that I had weaned the oxygen stating that the baby had a history of apnoea. I wont go in to the discussion that arose thereafter but the nurses later informed that they were not allowed to wean oxygen without a doctors order and had been instructed to set all blenders at 40% regardless of saturations.

As you can imagine I was angry and concerned at the situation, as I believe it placed the babies at risk and undermined the nurses independent function and their obligation as patient advocates to deliver and advocate for the best possible care. As nurses we are responsible to constantly update our knowledge and to deliver care that is in line with the latest best practice/standards/evidence. But what is the point if we must just blindly follow doctors’ orders.

This question reminded me of an old paper I had read by our own Charlotte Searle- The Dependent, Independent And Interdependent Functions Of The Nurse Practitioner — A Legal And Ethical Perspective -presented at the 1st International Congress on Nursing Law and Ethics which took place in Jerusalem, Israel, June 13-17, 1982.
https://pdfs.semanticscholar.org/5a10/605431a34a758a437ac825050243cb2ba568.pdf
I encourage you to read the whole article-its only 5 pages;-)

In the paper she explores the 3 different functions of nurses and how these have evolved through history including possibly the first recorded incidence of a midwife refusing to carry out an order when midwives Siphra and Pua disregarded the order of Pharaoh to kill all the newborn male infants born to the people of Israel. (Exodus 1: 15-21)

I quote:
“The dependent function of the nurse is based on the law which authorizes his/her practice, as well as on common law and relevant statutory laws. This includes the regulations made by the subsidiary legislative authority, namely the South African Nursing Council. It further includes decisions given by the courts and the interpretation of such laws.
It is not based on that which the doctor prescribes requests or directs for the patient. The registered nurse should still act as a professional person and should be responsible and accountable for her own acts and omissions even in accepting such direction or prescription.”

“The interdependent function relates to the inter-relationship of the nurse with the patient and with other members of the health team. In particular it relates to the interdependence of nursing and medicine. The nurse, whether as institutional practitioner or as private contractor, is not the servant or subordinate of the doctor. She is a registered nurse practitioner, entirely responsible and accountable for her own acts and omissions to the registration authority, the South African Nursing Council, and in the broader sense, to the courts. Where she accepts a prescription, request or direction for treatment of a patient from a doctor, she does so as an independent practitioner on behalf of her patient and as a shared responsibility with the doctor.”

“The independent function of the nurse has two dimensions. One dimension relates to all those aspects inherent in nursing diagnosis, treatment and care which are the normal prerogatives of the nurse. The other dimension is concerned with the manner in which she carries out any of her duties as a registered nurse, whether this be an independent or interdependent function. Whatever she does, she does on her own responsibility and accountability for in law she is personally liable for her acts of omission or commission. She and she alone remains accountable for her actions.”

As can be seen it’s quite a complex and sometimes rather a murky situation. 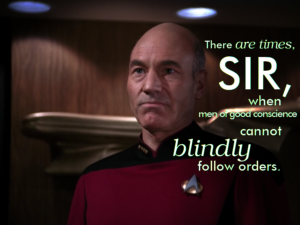 When considering how a nurse should react to orders she thought were wrong I was reminded of the Nuremburg trials following the Second World War. A set of principles were developed following these trials to determine what could be considered a war crime. These have implications for soldiers and, as modern nursing evolved from a military background, (Florence Nightingale served in a military hospital in the Crimean War and doctors were senior military officers) for nurses as well.

“According to the Nuremberg Principles, it is not only the right, but also the duty of individuals to make moral and legal judgments concerning wars in which they are asked to fight (or orders they must carry out). If a soldier participates in an illegal war (and all wars, apart from actions of the UN Security Council, are now illegal) then the soldier is liable to prosecution for violating international law. The fact that he or she was acting under orders is not an excuse. The training of soldiers is designed to remove the burdens of moral and legal responsibility from a soldier’s individual shoulders; but the Nuremberg Principles put these burdens squarely back where they belong – on the shoulders of the individual.”
The Nuremberg Principles and Individual Responsibility- John Scales Avery

Before we carry out any orders we have an obligation to determine the moral, ethical and legal validity of the order. This can be difficult for an average nurse to do and we therefore rely on facility/institutional/ provincial or national guidelines and policies to guide our practice, but we are still responsible and accountable for all our acts and omissions.

I came across this article “Greater nurse autonomy associated with lower mortality and failure to rescue rates.”
(Van Oostveen C, Vermeulen H, Evidence-Based Nursing 2017;20:56.) in which the authors investigate the value of nurses’ clinical knowledge in decision-making for improving patient outcomes.

“This study provides evidence that when nurses do not have the ability to exercise their clinical and organisational knowledge, patient safety is put at risk. Therefore, healthcare organisations are responsible for providing necessary means for nurses to act autonomously, that is, by formulating clear roles, responsibilities and behaviours; enhancing competence in practice and decision-making; using shared governance organisational structures, and by creating strong visible leadership. However, nurses should also take responsibility for their own behaviours and actions. ‘To optimise its value, autonomy must be accompanied by proactive behaviour (ie, self-starting and forward thinking to prevent, rather than react to, workplace problems) on the part of nurses’”

Most nurses today have a wonderfully affirming, mutually respectful and supportive relationship with their medical colleagues and do play a vital and integral role in delivering quality clinical care however, as can be seen in the example at the beginning, this is not the experience of all. It is crucial that we understand and operate fully in all three aspects of our nursing functions, that we claim our professional status and embrace our key responsibility to always advocate for the best possible care. In order to function in these roles it is critical that we continue to learn and develop and to stay current with research in order to develop confidence and clinical credibility.

Take pride in being a nurse and stand up for yourself as a professional with a vital role in the multidisciplinary team. Your babies and their families are depending on you!